The sky over Zambia is the backdrop to a wildlife phenomenon that towers over the Great Migration in more ways than one. During the Bat Migration, more than 10 million straw-coloured fruit bats descend on the Kasanka National Park and amass in an explosion of sight and sound for a rare safari experience. 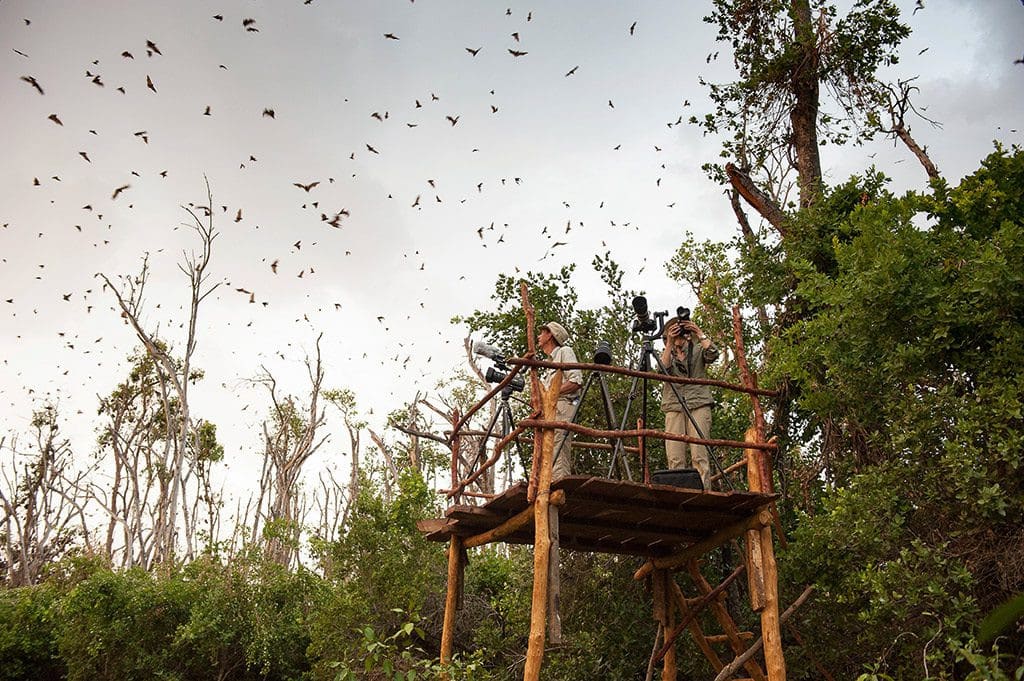 For 90 days during the latter parts of the year, the bats take over a swampy forest area in Kasanka. During dusk and dawn and from raised platforms and hides, visitors will be astounded at this marvellous sight as the bats leave and return to their roosting sites.

The period for bearing witness to the greatest mammal migration on the planet seems to stretch as the years go by. The bats usually start the trek back home in the middle of December, but in recent times this departure date has been pushed back into the new year.

The species of the Bat Migration

Even though the straw-coloured fruit bat is widely distributed, a decrease in population figures has led to a “Near Threatened” conservation classification. With their yellow-brown necks and backs and a tawny-brown underside, they are a sight to behold.

The bats survive on a diet of bark, flowers, leaves, fruit, and nectar. They have also been observed chewing on softwood to quench their thirst. As pollinators, they play a crucial role in the existence of a variety of species. With a wingspan of up to a metre, the straw-coloured fruit bat is an extremely strong flier. Its long, finely edged wings make for perseverance over swiftness.

Interesting Facts about the Bat Migration

As the highest concentration of any large group of mammals on earth, there are most certainly just as many interesting observations:

• Branches that hold masses of bats have been known to collapse under the weight of these mammals.

• Bats that have fallen to the ground are often consumed by water monitors, crocodiles, and even leopards.

• Bats gorge on more than 330,000 tons of fruit during the months of the migration.

• Bats travel from as far as the Republic of the Congo to join the migration.

• A fire expulsion zone has been set in the Kasanka forest to protect the bats’ habitat.

Where to see the bat migration

Even though the Kasanka National Park in Zambia is one of the country’s smallest parks, it doesn’t distract from the wondrous adventure that is the migration of the straw-coloured fruit bat. Five perennial rivers in the park form part of the Greater Bangweulu Ecosystem.

Apart from the gathering of millions of bats, there are more than 100 other mammal species to be spotted, including elephant, buffalo, and the sitatunga. Over 471 bird species have made the park their home.

The first of the straw-coloured fruit bats start making their presence known from the middle of October. An excursion to these neck of the woods should ideally be time for November as this is when the numbers start swelling exponentially. The animals depart again towards the end of December.

Zambia’s dry season occurs between May and November, with the hottest temperatures rising in October and November. The rains usually start in late November and continue up until March.