Unique and untouched, some of the best safari parks in Namibia largely comprises of desert and salt pans, and provide unforgettable safari experiences. A western border dominated by the cold Atlantic Ocean, northern land borders with wild Angola and Zambia, Botswana to the east with its flood plains, and South Africa to the south-east.

This landscape is the setting for truly incredible natural events, and some of the best safari parks in Namibia have become must-sees on buckets lists for the adventurous traveller. The most visited places include the capital city of Windhoek, Caprivi Strip, Fish River Canyon, Sossusvlei, the Skeleton Coast Park, Sesriem, Etosha Pan and the coastal towns of Swakopmund, Walvis Bay and Lüderitz to name a few.

Among the unique wildlife to see are the populations of the desert elephant—which are incredibly rare and only found in Namibia and Mali, and desert-adapted black rhinos and lions. Namibia’s most rewarding wildlife experiences include tracking these giants. Those looking for rare antelope species can expect to find picturesque sights of the oryx or roan antelope galloping across the dunes.

Wild Safari Guide has narrowed the best safari parks in Namibia down to these five excellent choices.

Are you ready to plan your safari to Namibia?

Click here to see all the best safari parks in Namibia

This wild and vast national park is Namibia’s largest conservation area and contains some of the country’s most iconic attractions. The world’s tallest dunes at Sossusvlei, the imposing canyon at Sesriem, forgotten shipwrecks and ghost towns along the icy Atlantic coast, stark inselbergs and mountain ranges, and lichen-encrusted gravel plains.

The park is incredibly well known for the most photogenic backdrops in the world. The red dunes, the bluest sky, the white earth and the few remaining trees that you see in almost every photograph when researching Namibia. The majority of this park is inaccessible and inhospitable so the points of interest are dotted around its perimeter that goes all the way to Luderitz in the South and stretching to Swakopmund in the North.

Image by Jay Roode: An aerial image of the red dunes 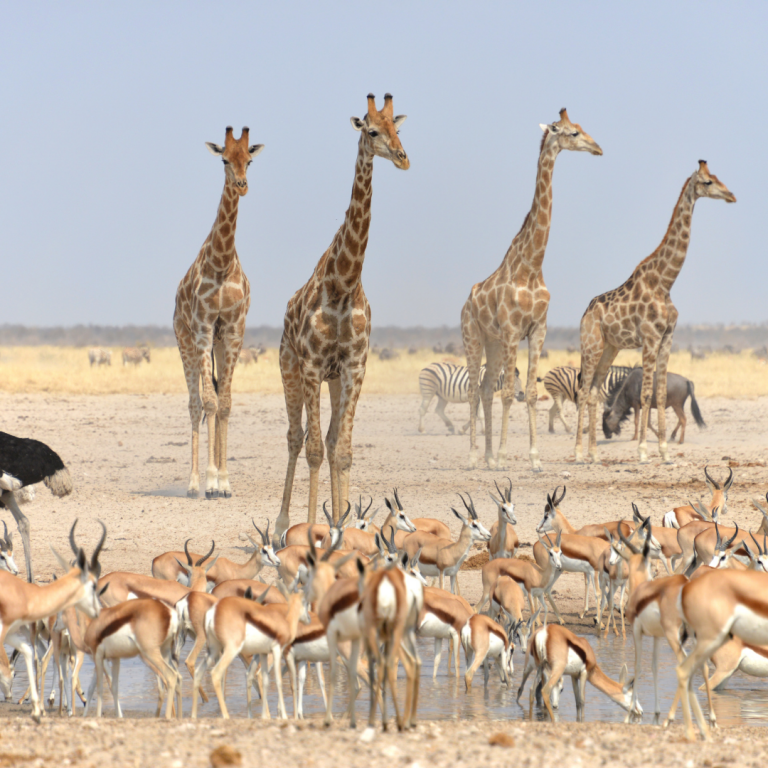 Etosha National Park is proudly one of the largest and oldest National Parks in the whole of Africa. It is world-renown for its spectacular wildlife specifically around their scenic waterholes that dot the otherwise expansive salt pans. Elephant, black and white rhino, lions, leopards, cheetahs, large herds of springbok, zebra, wildebeest, giraffe and a multitude of other fascinating species, are found in one of the best safari parks in Namibia.

What makes wildlife in this particular park even more unique is the otherworldly landscape. It is not the typical green, tree-dotted savannah that you normally see. The white earth of the salt pans gives a dramatic backdrop to the incredibly well-adapted animals that thrive in this region.

Etosha has a proud record of black-rhino conservation, and the white rhino was recently re-introduced. The park has also played a major role in the recovery of the endemic black-faced impala.

The Skeleton Coast National Park is 40 kilometres wide and a 500-kilometre coastal stretch in a hostile but fascinating area. Here the cold and unpredictable Benguela Current of the Atlantic Ocean clashes with the dune and desert landscape of north-western Namibia.

The park can essentially be divided into two sections. The Northern part; a wilder, desolate area that is almost inaccessible yet home to the famous beach of wrecks. And the southern, where one can venture by road, visit the year-round seal colony, and go off the beaten track. This Skeleton Coast National Park is home to a variety of marine wildlife. Cape-fur seals are abundant. The most accessible colony is at Cape Cross, outside the park to the south. Up to 100,000 animals can be seen here at any time.

The area is also a rewarding birding destination. Marine birds, as well as wetland birds that inhabit the river deltas, are the speciality here. 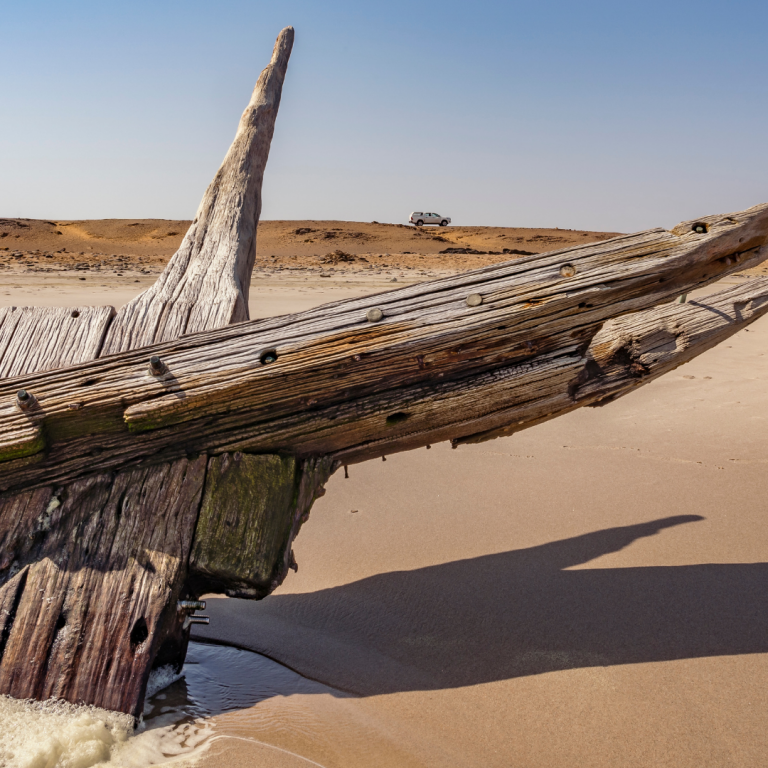 Image by Mara Duchetti: A shipwreck in the Skeleton Coast National Park 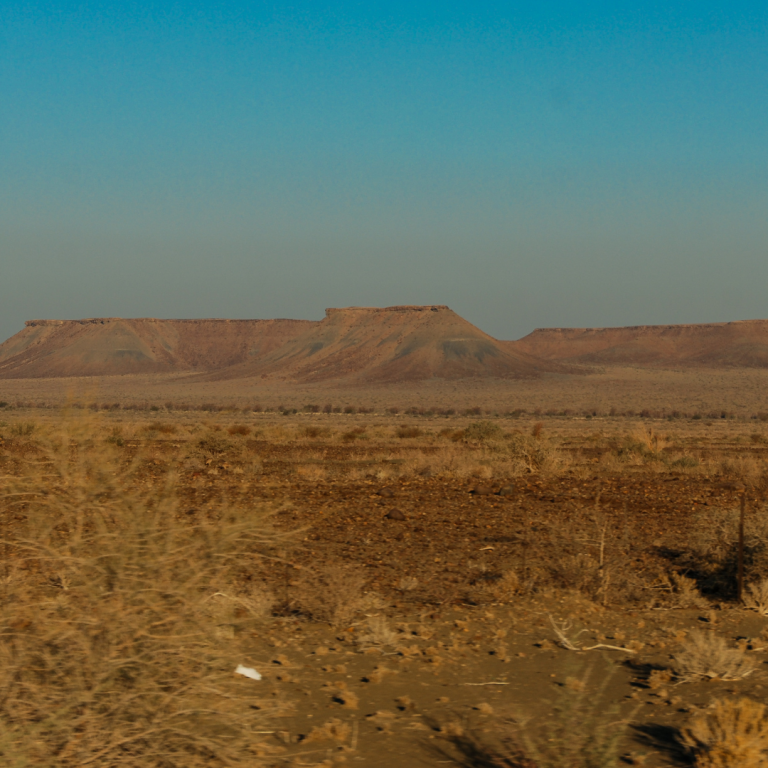 Recognized by UNESCO as a World Heritage Site, one of the best safari parks in Namibia is one of only two entirely arid ecosystems to earn hotspot status, the other being the Horn of Africa. Spanning across 5,920 km², this transfrontier park comprises the Ai-Ais Hot Springs Game Park in Namibia and the Richtersveld National Park in South Africa.

Wildlife is very sparse and large animals aren’t present in the park but there are a few for those who take the time. The rare, localized Hartmann’s mountain zebra can sometimes be spotted as well as klipspringer, kudu, leopard and brown hyena. The area has over 200 bird species recorded with 23 species restricted to southern Africa. The high cliffs are great viewing sites for other birds of prey, such as jackal buzzard and African fish eagle.

There are legendary hiking trails that involve camping under the stars, similarly with the kayaking trips done on the Orange River. Self-driving 4×4 adventure in the rugged terrain is the most popular and mountain biking across it even more so.

Located in the northeast stretch of Namibia, is in the incomparable Caprivi Game Park. The area is predominantly a fascinating network of rivers, wetlands and densely wooded mopane and Kalahari forests. Covering an impressive 6,274 square kilometres of swampy landscape bordered by rivers, Caprivi is one of Namibia’s scenic areas.

Sandwiched in between Zambia and Botswana, in the fingerlike protrusion of the captivating Caprivi Strip, the park is a perfect destination for a unique safari experience. The park is a haven for the big five, in particular lion and leopard. Other notorious predators include spotted hyena, African wild dog and cheetah.

The main activities in the park focus on game viewing and birdwatching. Because the area is within the Zambezi basin, the most popular safaris take place on the waterways. Local tour operators offer motorised boat trips, game drives and guided walks into the park. The year-round lush vegetation is ideal for photography, even if wildlife sightings are low.

Image by Artush: A herd of elephants drinking at a muddy waterhole