Marine Life and Diving in Zanzibar

Marine Life and Diving in Zanzibar

Diving in Zanzibar is a once-in-a-lifetime adventure—from finding forgotten shipwrecks to swimming with manatees, rays, whale sharks, turtles, and friendly dolphins. The coral reefs of Zanzibar are among the top diving spots in the world. Its warm, clear waters are home to over 500 different types of marine life, and it offers everything from deep-sea diving to shallow coral excursions, enormous wall diving, shipwrecks, and drift diving. 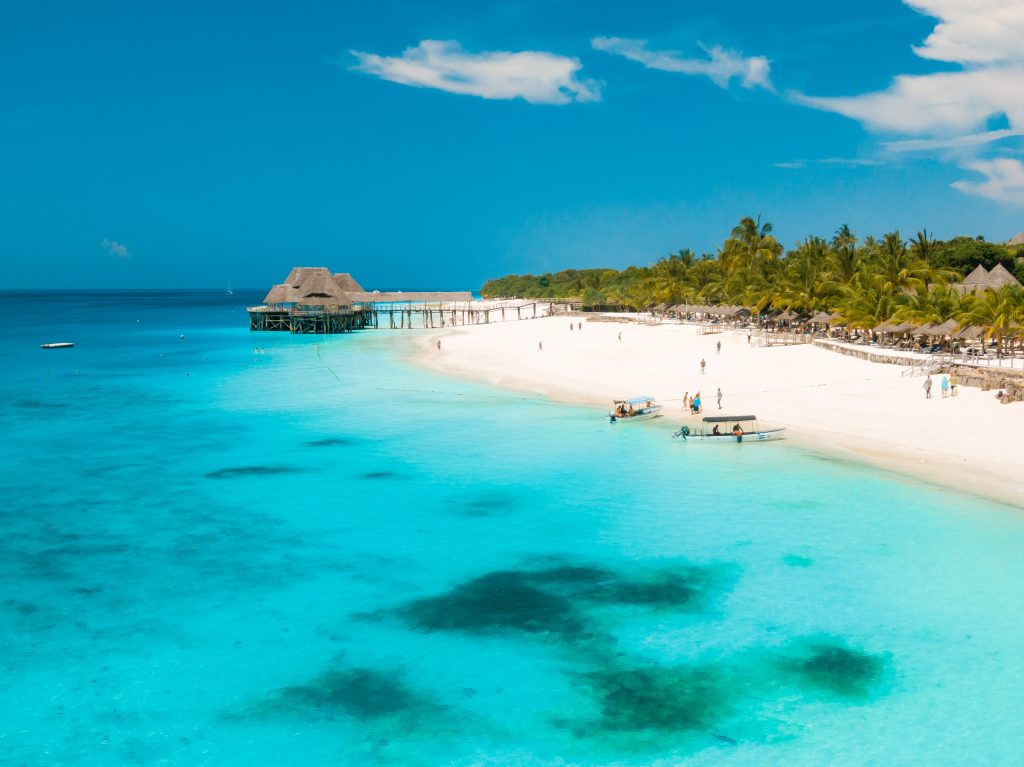 Mnemba Atoll is East Africa’s self-proclaimed tropical fish capital, with a myriad of marine life as well as plenty of drift diving along the walls and edge of the reef. Divers should bring along their cameras to capture underwater photos of butterflyfish, leaf fish, pipefish, and a plethora of shrimp, lobsters, graceful manta rays, dolphins, turtles, and even sharks.

Leven Bank is home to a large population of big game fish, including tuna, barracuda, and massive moray eels. Those visiting Mafia Island between October and March might see a whale shark. The months of September and October are ideal for migrating Humpback and Sperm whales while visiting between December and April means manta rays and whale sharks are about.

The Nungwi Reefs site was named one of the top scuba diving locations in the world a few years ago. It is located at the northern end of the island, just north of Zanzibar city. There are over 100 hard coral species here, including staghorn, elkhorn, brain, and table corals. The Nungwi Marine Reserve is located between the mainland and the island of Ujamaa and is made up of several small cays: Mwezi Cays, Kizimbani Cays, Chwaka Cays, Mkuuwa Cays, and Ng’ambo Cays.

Misali Island is regarded as one of the best diving destinations in East Africa, if not the world. This beautiful section of the Pemba Channel Conservation Area is located west of Pemba Island. The untouched corals that surround the entire island support a diverse range of marine creatures. Divers are encouraged not to touch the corals to preserve the natural ecosystems, which are home to 42 different corals and over 400 species of aquatic life.

Diving in Zanzibar is heavily influenced by the winds, water visibility, and tides. The southern wind, known as “Kusi,” blows in July and August, while the northern wind, known as “Kaskazi,” blows from mid-November to early March. There are two calm seasons in between the monsoons. Because of the rains, April and May are not the best months for visibility. Diving is best from June to August, and from mid-November to early January. During that time, the water temperature is also quite pleasant (24°C -30°C).

Many diving spots in Zanzibar and the adjacent island groups are protected, ensuring spectacular reef diving with enormous corals in excellent health, as well as a plethora of marine life. Staghorn, elkhorn, brain, tabletop, finger, mushroom, and soft coral are among the more than 200 types of coral found here. The waters near Zanzibar are usually clear, with visibility reaching up to 30 meters at times. Sea horses, harlequin shrimps, snake eels, and octopus, as well as the strange and magnificent Indian Ocean walkman, are all sights to be expected when diving in Zanzibar.

What are the best times to see marine life?

Although Zanzibar’s beautiful weather and clear waters make it ideal for diving, for divers with special interests, the migration seasons with the highest concentration of certain marine animals and the best chances of seeing them differ throughout the year. For those wanting to see Manta rays, divers should visit between December and April, while Blacktip reef sharks are best spotted between June and March. Whale sharks are abundant around Mafia Island and are usually sighted between October and February. The nesting period of Green turtles is between September and February, while hawksbill turtles, whitetip reef sharks, and dolphins can be seen all year-round.

Chat with one of our safari experts to plan diving in Zanzibar. We’ll help you custom-make the ultimate safari adventure for you and your family.