Although the best safari parks in the Democratic Republic of the Congo (DRC) occasionally come with a travel warning, that doesn’t mean this erstwhile war-torn country should be discarded as a worthwhile African safari destination. The DRC remains the perfect destination for those who seek adventure.

The vast landscape is dissected by the mighty Congo River that ends in the Atlantic ocean and dominated by tropical rainforest, the second largest in the world. Captivating wildlife encounters abound, including coming face to face with the mountain and lowland gorillas. Geological wonders like active volcanoes and one of only four continuous lava lakes in the world on Mount Nyiragongo should also not be missed.

Since the DRC is not generally regarded as a safe destination, it is best to make use of a tour operator when planning on travelling to the country for a true wildlife experience bar none. Primate trekking is probably at the top when it comes to a safari bucket-list, and there is no better place than the DRC. These enthralling experiences take place in the Virunga National Park. Additionally, wildlife excursions can be undertaken in any of the other national parks and reserves of which there is a handful.

The country’s ecosystem affords shelter to at least four endemic species like the mountain gorilla, the okapi, the bonobo, and the Congolese peacock. Other rewarding sightings for visitors to this landscape occasionally shrouded in mist include some 1,500 mammal species including chimpanzees, the savannah giraffe, golden cat, lions, and various antelope species. There are also around 200 bird species.

Wild Safari Guide has narrowed the best safari parks in the Democratic Republic of the Congo down to these five excellent choices.

Are you ready to plan your safari to the DRC?

As one of the first protected areas in Africa, the Virunga National Park should be high on the must-visit list of any serious safari-goer to the continent. It lies in the east of the Democratic Republic of the Congo in the Albertine Rift Valley and borders Uganda and Rwanda.

The astonishing array of wildlife makes Virunga one of the best safari parks in the Democratic Republic of the Congo. The mountain gorilla has managed to carve out an existence in the Virunga mountains. The slopes of the volcanoes in the park is home to a third of this endangered species.
In total, almost 200 mammals, more than 700 birds, and 109 reptile species have found a safe refuge within the borders of the park. The more than two-thousand plant species, of which 230 are endemic to the region, provide shelter and food for its wildlife.

Primate trekking and getting up close and personal with species like the mountain gorilla, chimpanzee and golden monkey are the focus for most visitors to Virunga National Park. This includes a visit to the Senkwekwe Gorilla Orphanage, the only one of its kind in the world. 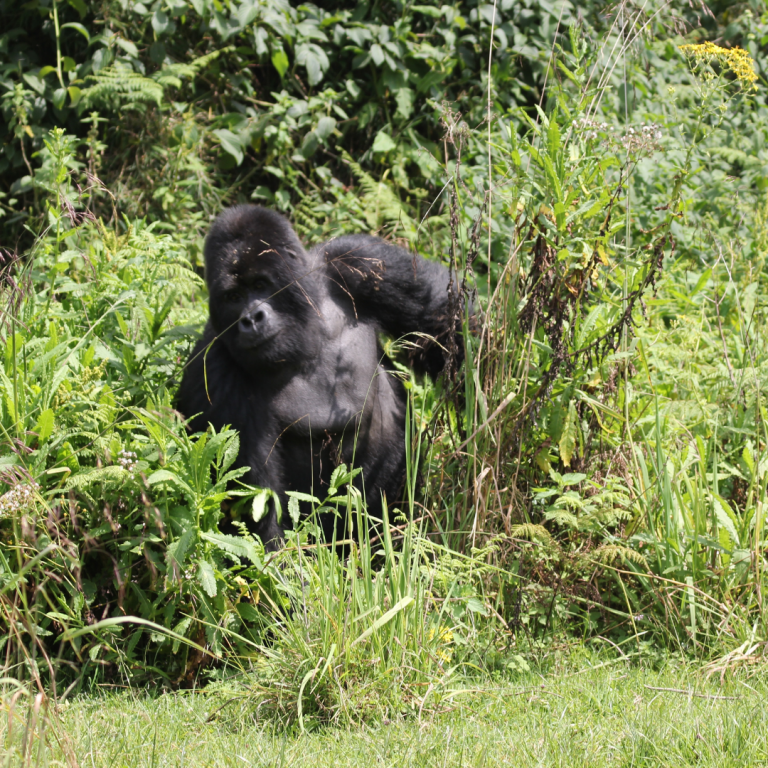 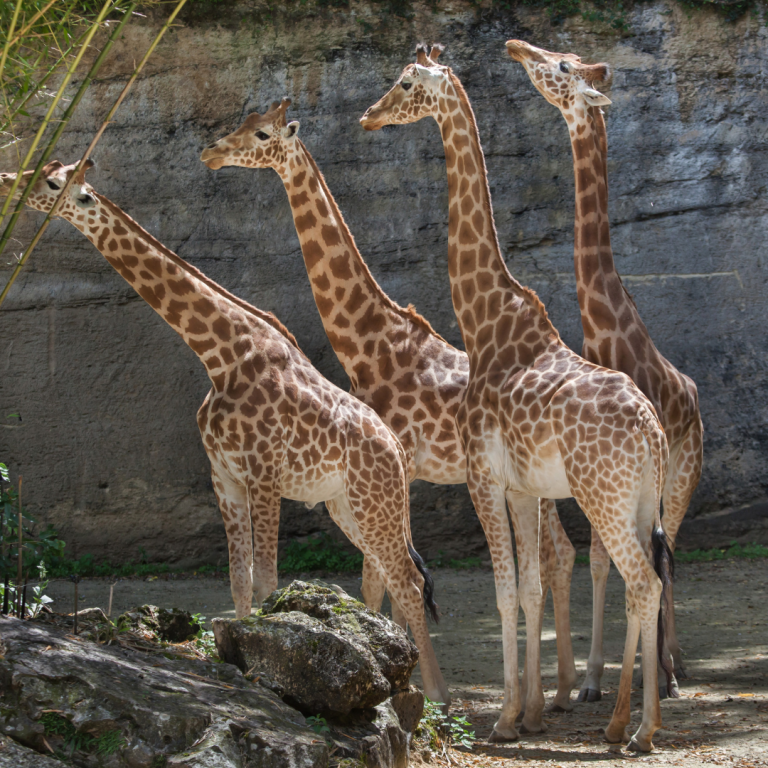 The landscape and wildlife of Garamba National Park are sustained by the Garamba, Dungu and Aka rivers. A wide variety of species are supported by the biogeographic zones of Guinea-Congolian and Guinean-Sudanese savanna that consists of savannah woodlands, grasslands, papyrus marshes and riparian forests. The impressive sausage tree is prevalent throughout the park.

The park is the last remaining enclave in the DRC for the Kordofan giraffe, numbering less than 60 individuals. Fewer than 2,000 elephants, believed to be a hybrid of the African savannah and African subspecies, call the park their home. The park’s bountiful food and water resources provide sustenance to other species like forest buffalo, waterbuck, kob, hartebeest, yellow-backed duiker, sitatunga, serval, and several primates.

Game drives and guided walks will entice most travellers while bird watching will be at the top of the list for twitchers. One can also take to the skies for an aerial view of the landscape and its inhabitants below. The waterways of the park make it a good destination for boat cruises while designated areas allow for fishing.

Sitting comfortably on 10,000 square kilometres of varied terrain in the southeastern part of the DRC is the exquisite Upemba National Park and one of the best safari parks in the Democratic Republic of the Congo.

At the epicentre of lower Upemba National Park is Lake Upemba, known for its tiny islands and waterfront areas frequented by wildlife. The elevated Kibara Plateau defines the higher sections of the park and is notably drier than the lower reaches. The biodiverse region of Upemba supports numerous species of wildlife. Interestingly enough, the only zebra herds found in DRC are located in Upemba National Park. Visitors can expect to see oribis, baboons, the Katanga impala, cheetah (extremely rare) and the Upemba lechwe (endemic).

The best way to discover Upemba is to organise a guided game drive across the elevated plateau. The lower, water-logged reaches of the park are ideal for fishing. Hiking is a popular activity in the more mountainous section of the park in the Kibara Mountains. 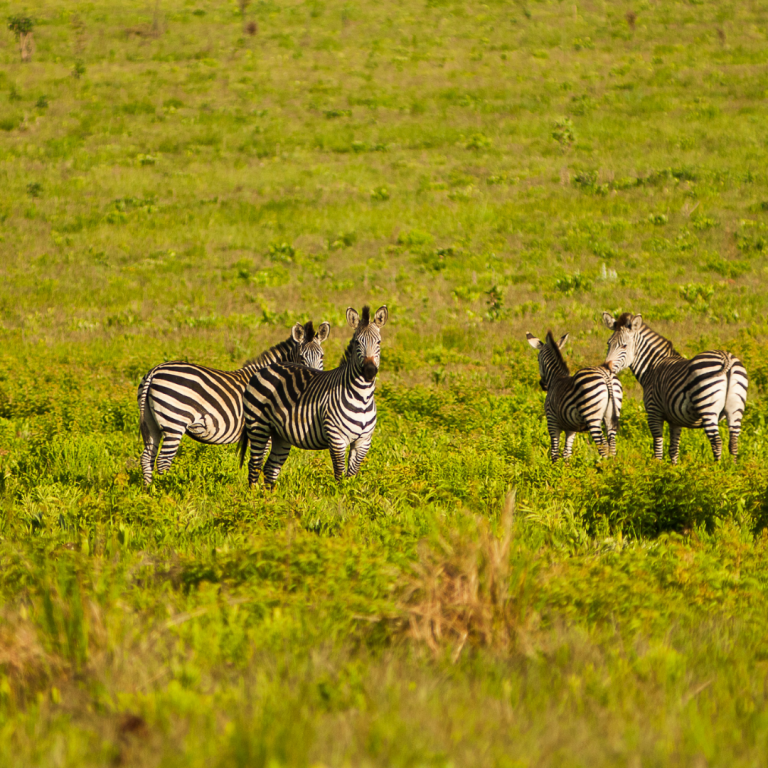 Burrowed in the heart of the Congo River basin in the Democratic Republic of the Congo, is the expansive Salonga National Park. It provides the perfect ecosystem for high concentrations of bonobos and three species of pangolin.

The park is dissected by curvy and broad rivers, that give rise to a network of tributaries and marshlands. The pristine terrain is an extensive region of waterlogged landscapes, only accessible via river or air. Primate populations are high in the rainforests and sightings of Thollon’s red colobus and Dryas monkeys are not uncommon. Other mammals to spot are genets, golden cats, hippo, forest buffalo, elephants and slender-snouted crocodiles.

Salonga is a beautiful and isolated national park, best explored in motorised riverboats and on foot. River guides introduce visitors to the culture, history, and wildlife of the area. Guided walking safaris are yet another incredible way to experience the DRC on foot.

The rugged paradise that is Maiko National Park is unmarred by tourism and remains one of the most unexplored regions on the African continent; making it a desirable destination for extreme expeditions.

Maiko National Park is ecologically diverse, playing home to a variety of wildlife species making it one of the best safari parks in the Democratic Republic of the Congo. Three endangered species in the DRC thrive in the park’s unique habitat. They include the Congo peacock, eastern lowland gorilla and the okapi.

The Oslo River cuts through the park and provides a haven for broadbills, egrets, kingfishers and cormorants. Other commonly spotted birds include turacos, pitas and the Congo serpent eagle. The main highlight of visiting Maiko National Park is to track the eastern lowland gorillas. There are a variety of hiking and nature trails while visitors can also engage in bird watching.